Why Political Correctness is Fascism in Disguise

Why Political Correctness is Fascism in Disguise

Hello all, I must warn you that in this post there may be some rather sensitive issues to some of you, so I would like to offer my most humble trigger warnings to those of you out there who prefer to judge truth based on what you "feel" rather than what actually is. So without further a do, lets begin by examining what fascism actually is, as it seems to be one of those words that people like to hurl about without even knowing its definition or relative context.
Fascism is a political ideology that forces people to live by the state for the state and decimates any oppositional ideology or politics through collective indoctrination and fear of authority. This a broader meaning of the term "Fascism" in it's political context as it had originally risen from the left wing dictatorship of Mussolini and was further adopted primarily by left wing parties in China, Russia, Cambodia and other countries of Asia and Eastern Europe. Now how does this relate to Political Correctness i hear you ask. Well it relates like it's sibling in fact, and it couldn't be closer to imposing a fascist state of government and ideology as it is in our current day and age. Political Correctness is a form of disillusion - enforced - confusion that has spread across the West and encouraged society to silence itself on the issues that matter most to human sovereignty, all while making people think they are championing a new age of "enlightenment". It has done this through imposing fear of being viewed as closed minded by the crowd, ridiculing free though not using Politically Correct ideological overtones and language, and making people think that boundaries such as opposing gender neutral toilets are infringements upon human rights. 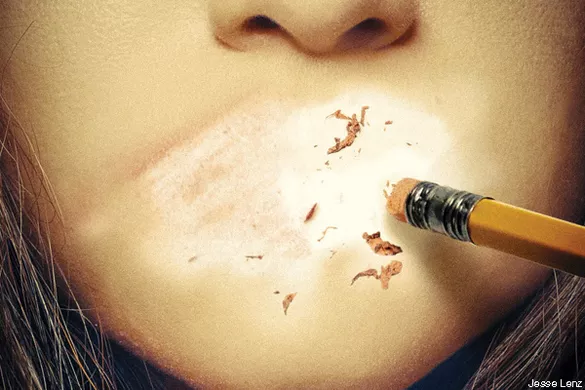 Firstly, let's look at Political Correctness itself. Political Correctness is a school of thought that develops language, policies, or measures that are intended to avoid offense or disadvantage to members of particular groups in society, mainly minority groups. All seems fine and innocent here, but focus on the language of "offense", which may seem trivial but on an intrinsic level opens up societal discourse to extreme measures of obfuscation and inequality. The effect that this has is that we are able to be objectively manipulated and restricted as a society in our individual expression and freedom as we conform to subjective offense. Not only is this offense enhanced by the very nature of PC culture, but it is encouraged by it and also desired by many of its followers. Many of them aren't very serious about the issue and don't know of it's systemic effect on society, but many of the PC cultures collective group are searching for an environment in which to project their own problems on the world through peer pressure & government policy. What is it Doing to Society?

It is making people think of each other in their segregative groups based on ethnic, sexual, gender and religious groups. It compartmentalizes women, men, black, Chinese, gay, lesbian, or transgender groups based on their physical attributes and without considering their individuality as a human being, essentially boxing people up based on their objective appearances. It then by classification of victim hood adopting cultural Marxism to ensure that people objectively treat eachother based on their physicality, not the actual personality traits of a good person. This can be seen in the protection of Israel by the UK & US Governments and media in the case of them committing genocide upon Palestinians - It doesn't matter that Israel is genocidal and indoctrinating it's population into a state of racial supremacy, they can't be spoken out against because they are Jewish and you are therefore "Anti Semetic" - Israels Government knows this and is taking advantage of the holocaust in order to advance their own Fascist state. This essence of labeling and compartmentalizing minority groups allows society to be manipulated in it's perception of events and conduct by making people afraid of being "offensive"and therefore restricting their freedom of speech in fighting critical issues. This intense obsession by treating people by the standard of their group identity is prejudice and allows disadvantage through dis-acknowledgement and achieves exactly what it is that PC culture claims to oppose. It makes the people police each other and their own language and silence opinion and fact that exposes true oppression by labeling it "offensive". 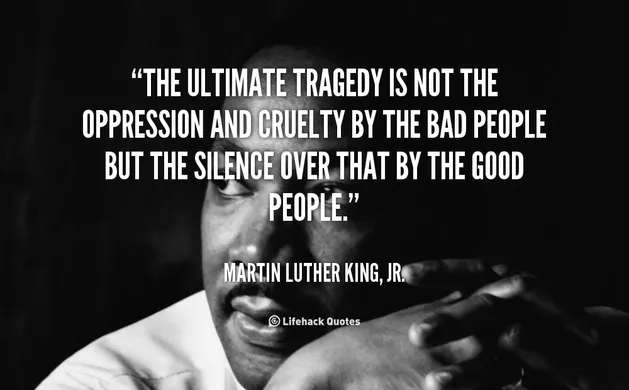 This culture of PC has grown very fast and this has been no mistake, with media pundits, news, TV programmes, schools, doctors and even government policy all being geared to be "inclusive" and "progressive". Of course they are progressive, but the state of affairs that they are bringing about is of not benefit to human society or free though and expression at all. A society that is progressively more disconnected through technology and the widespread influence of the internet has voided much purpose in life, and will transfuse into a situation where the disparity caused by this disconnection with ourselves as humans will manifest into distorted "inter connectivity". This distortion has manifested as our current perception of diversity and inclusiveness, but now that everyone has their own box, identity and cover from criticism through PC culture we are more separated than ever based by our physical identities. This can be observed within a Black Lives Matter campaign in an American event on "equality" stating "no whites" were allowed, and people who wear and celebrate clothes of another country being accused of "cultural appropriation". Shelley Garland, a prominent Feminist activist stated "some of the biggest blows to the progressive cause these past years can be attributed to the voting of white males". So you see here, how PC culture ignores it's own principles of unconditional equality when it comes to so called "privileged" groups, and by it's very definition is misleading and vindictive to the opinion of these groups. Garlands reasoning is exactly the thinking that was used to prevent women from voting as they were wrongly considered to be a negative effect on the democratic process, but Feminism is allowed to advance this same philosophy upon men and not be viewed as sexist? This is the "oppressed" becoming the oppressors, and instead of exposing and denouncing bad ideas with good ones they simply censor them and criminalize those who oppose this dictatorship of linguistic fascism. Diversity has now become Group Think & denouncing anyone who doesn't toe the line. This was exactly how Hitler and other dictators control the minds and limit the perceptions of their masses, and most of the time they fool everyone so well that we force each other to conform by their Fascism! (Which is what PC is doing!)

This is most dangerous however because of the impact that this culture is having on university campuses around the world. Gender studies classes, equality programmes and "safe spaces"(essentially places for people who can't stand reality and would rather ignore the world and be coddled by false ideology) have been developed to structure the mentality of the new elite working forces to adopt these divisive practices. They do not teach "Mens" studies by the way, but rather focus on Female and Transgenders to teach people to be considerate and open minded about matters - Yeah very open when you selectively fail to include all Genders in a Gender studies class, might as well teach History without WW2! The cognitive dissonance of claiming inclusivity for while exercising exclusivity is just the start, these classes go to the point where students are infantilized from making their own decisions and instead filter reality through a constructed lens that only perceives race, gender, religion, and anything except from the human being underneath it. This means that jobs are given to those who can increase "minority employees" regardless of their ability to perform, laws are created like Canada's Bill C-16 that enables people to be arrested and convicted for hate speech if they do not address people with their chosen gender pronouns, another example of how this agenda restricts freedoms based on subjective impersonalities and threatens prison if you don't obey. Children as young as four are now taught in schools about gender fluidity and other sex related issues before they are even able to naturally comprehend or decide these facts for themselves in a logical fashion. This leads to incredible confusion and disillusion about the biological realities of gender and ignores boundaries that should be applied to young children, but as they are not we now have increasing amount of prepubescent children taking sex changing hormones and other drugs making potentially regrettable life changing decisions when they never were before. But to question such matters being taught to children and to question encouraging them to debate their own gender identity would be considered "anti-diversity" and "discriminatory" by PC cultures. It would not be considered dangerous to the mind and body of the child who has no way of fully comprehending what they are doing, it would just be "progressive". 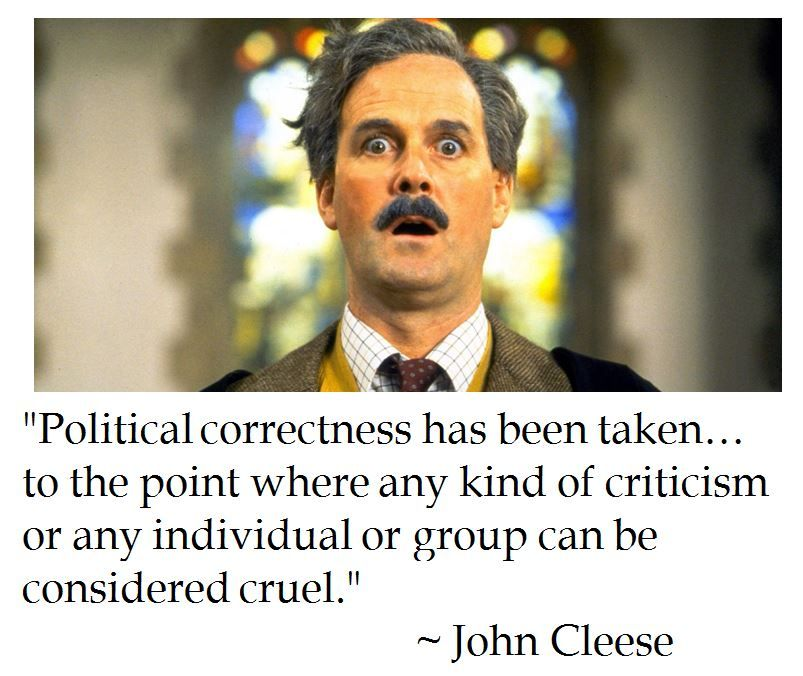 Overall the Fascism of Political Correctness can be seen to be manifesting in society in education, the workplace, halls of law, politics and even the civil discourse of human interactions. It demeans our human rights and forces us to divide and rule ourselves based on cultural, ethnic or any other physical significance. It censors free speech through the demanding of a new language designed not to offend and by reactionary individuals who condemn you for "hate speech". It censors free thought from a young age as people are now being taught to think with an ideological filter that ensures they won't attempt to decode "controversial" subjects due to fear of progressive peer pressure and realize real inequalities. It censors free expression by making us conform to the idea that celebrating alternative cultures music and dress is racist and "cultural appropriation". This ideology is designed to progress exclusivity and privilege at the expense of majority groups, it is tyranny by minority - except they too suffer their own self enforced ideological prison. Instead of pursuing equilibrium division is created by punishing those whose ancestors have committed crimes against humanity, and allowing those oppressed to become the new oppressors of language and freedom. Merely tyranny is allowed to be transferred to a group that we are told cannot be tyrannical, so it becomes a Trojan horse to our individual freedoms. We need to be aware and thoughtful of "progressive" causes and Politically Correct enforcement, as we endanger changing society and breaking boundaries necessary to retain public order in a way that we can never change. Not all change is good, even the Nazi party was considered a progressive cause in it's day against the oppression of Communism and look how much German people and war victims suffered as a result. We risk our civil liberties and freedom of speech by trusting so much cultural power to Political Correctness, and we need to observe consciously it's causes for what they are underneath, and not just how "progressive" they are.
And just to prove that Political Correctness and those behind it do not care about people and use it to manipulate and control humans into policing themselves, here is the following discriminatory statement. And this last picture shows the discrimination brought out by Politically Correct causes funded by these psychopathic billionaires, as it depicts a post made by Toronto's Black Lives Matter racist campaign leader. But i will not cry outrage and offense as I see this racist picture, as Hypatia who was a female and ancient Egyptian mathematician, astronomer and philosopher once said "It is best to have even a bad thought, than to not think at all". 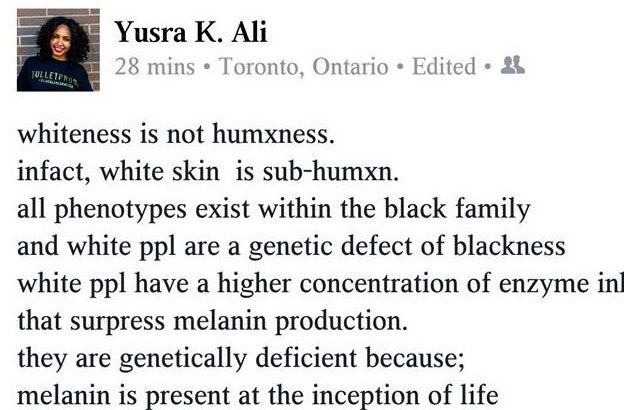 how to destroy your old Guild,2010